After a decade at the helm of the Humboldt Hogs lacrosse club, Tony Silvaggio announced his resignation as head coach following this season. 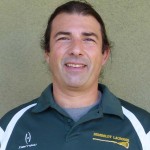 Silvaggio’s coaching career at HSU began in 2008 when then-goalie Sammy Siedenburg (currently the head lacrosse coach at Dominican University of California) asked him to take over the coaching duties and return the team to the WCLL. By 2012, the Hogs were in the WCLL playoffs and Silvaggio was named WCLL coach of the year.

During his 10 seasons at HSU, Silvaggio coached more than 150 student-athletes, including mentoring three MCLA All-Americans. In 2017, Silvaggio was named HSU sports club coach of the year. He was also inducted to the Hogs Hall of Fame in 2015.

A native of upstate New York, Silvaggio was coached by Roy Simmons III of Syracuse University fame and Ed Purcell while a defender and team captain at Keuka College (1987-1991). He remains actively engaged with the international lacrosse community.