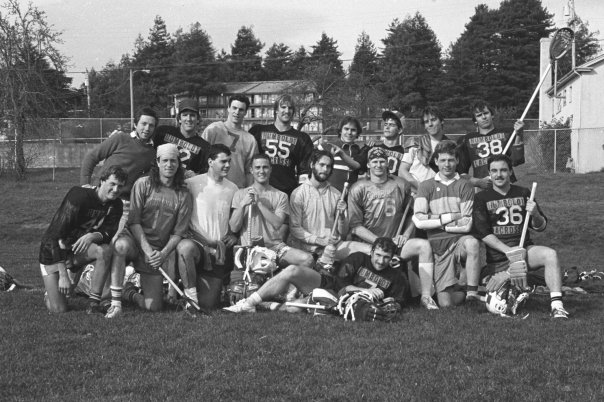 Freshman James Kircher and John Mahoney organized the men’s team in fall of 1983. James and John learned the game at St. Ignatius High School in San Francisco. The team was known as the Humboldt Hogs because they had no support from HSU. The Hogs played as an independent team in spring 1984 playing mostly B team squads. James was the player-head coach. The Hogs were admitted into the WCLL for the ’85 season. The first year in the WCLL started poorly with an ugly loss to Sacramento State that sent James for a swim into the American River as the team BBQ'd in the parking lot. They got their act together and finished the season with strong wins over Sonoma State and Santa Clara. The following season we missed the playoffs by one game, highlighted with a victory over Sac State. Starting with the ’88 season we took on the school name, Lumberjacks because the university started supporting the team with some money, partial paid coach through the creation of a PE weight training class, some equipment and easier access to fields.

Jeff Bedwell started coaching in the fall of '95. The first year was mainly spent on developing
the team -- "getting in the groove," one might say. He is not sure if the WCLL had the same requirements, but back then they were required to have many items for each player: physical, Code of Conduct, insurance, parent info, unofficial transcript and dues. The course was offered as P.E. 434, Men's Intercollegiate Lacrosse. It was changed to P.E. 315 the following spring.

The spring of 1996 really revealed the core of the "team to be." Many of the senior players and "curiosity kids" from the previous semester had left and they started to really build a solid beginning team. Jeff cannot give enough credit to Will Yavorsky for his great contributions he made.

In the fall of 1996 Hogs Lacrosse started to develop into a very solid team. The previous two semesters had taught Jeff well and he continued to build and harden the team.

By the spring of 1997 the team had become a formidable force. Their skills were solid, tactics honed and the players were reliable. Despite many set-backs (like Jeff’s choice of a horrid combination of jersey colors), they stunned the League and gained its respect by fielding an awesome, commendable team. Jeff brought on two assistant coaches, Bret and Whitey, who continued sharpening the team’s already lethal skills.

Jeff’s records are incomplete, but they beat Chico at home 15-12. Ravaged Cal Poly SLO, 11–9 (first ever and only victory over SLO) and shuttered CMC 17-14. They learned a tough lesson from Sac State, 9-6 (they won and Mike Messerschmidt was fairly decent afterwards). They sacked UOP and silenced their complaining by running up the score. Doug Paige had some of his best one-on-one's with their goalie. They also played UCLA, Occidental College, Santa Clara, St. Mary's, and got punked by Pepperdine (they forfeited; "didn't want to travel"...). It was our shining season and many fond memories were made.

The team was dropped from the WCLL after the 1999 season. From 2000 through 2008 there was a team with no league affiliation and they played only a few B squads each season with no home games. Tony Silvaggio, a sociology professor at HSU was finally convinced to come out and coach the ’09 season. With Tony’s leadership they created the annual fall tournament that attracts teams from Oregon, Nor Cal and Nevada. The WCLL reinstated the Lumberjacks for the 2010 season. With Tony’s connections to Oregon schools, the team will play their league schedule with the WCLL and their non-league games with several Oregon teams.

The team had four coaches in the early years that helped organize and develop a competitive team. Team founder and first head coach (and future Hall of Famer) was James Kircher from ’84-’87, followed by Judge Taylor ’87-’90, Mark Doodah ’91, James Kircher ’92-’93 and then Jeff Bedwell in ’96-’97. Judge was the first non-playing head coach starting with the ’88 season. Jeff coached the most successful season for HSU lax with victories over teams we had never beaten before including Cal Poly SLO and teams that were at the D1 level in the WCLL. The only teams in the WCLL before HSU that still have teams are Cal, Stanford, Cal Poly SLO, UC Davis, UOP and Santa Clara.

The girls did have a competitive team in the WWLL back in the late-’80s through the mid-’90s. They were started by Patti Taylor in Fall 1986. Once she graduated the team held together for a few years with some quality coaches and players but like most club teams without any real consistent leadership they made every effort to stay together but finally folded after the 2002 season. Erik Gropp coached the team in 2002 along with help from Chris Powell, both played for the men's team. The women's team was reborn in Fall 2008 with the new energetic leadership of Sammy Seidenberg.