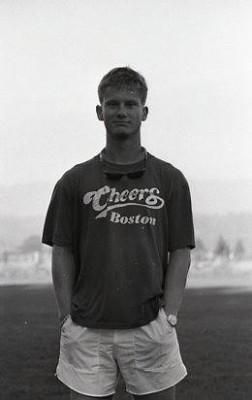 Sad news for all of us. I'm at a loss. ... He was a character, one of a kind. For those who don't know he played for the Hogs in the mid-'80s, was my assistant coach for a few years and then the head coach in the early '90s. He tried his best. He is a big part of the HSU Hog family. — Judge Taylor

The story he and I would always talk about was the UC Davis game played on the soccer field in 1988. In the opening moments I got a loose ball and as I approached the midfield stripe on the clear, I saw Doodha positioned next to the goal. I hit him with a half-field pass on the run and he quicksticked it right past the goalie. For a couple minutes there, Davis was scared... — Jason Foulds

Summer of 1988 road trip coming back from Tacoma, Wash., with PI and Dwight Pargee. Doodha driving his white Jeep Cherokee, screaming at the slow cars in front. Sleeping on the side of the road. Mountain biking illegally (didn't know until a ranger talked to us after the ride) on a trail through snow at Crater Lake. Watching the MLB All-Star Game at a pizza joint. Spending the night at a campground and all four of us laughing our heads off (sober) for 15 minutes while we made different poses in front of the mirrors that were like fun house mirrors at a carnival. — Judge Taylor

"Truckin', like the do-dah man. Once told me, "You've got to play your hand. Sometimes your cards ain't worth a dime, if you don't lay'em down." -- Grateful Dead