Text from Penttila’s Chapel by the Sea:
Luke H. Jensen was born April 5, 1989 in Astoria, Ore., the son of David and Christine (Houlding) Jensen. As an infant his nanny Jan Farley helped care for him until he was old enough to attend Peninsula Church Center Day Care.

Kindergarten through third grade was at Long Beach elementary followed by fourth through sixth grade at Hilltop School in Ilwaco. Then it was on to Ilwaco High School where Luke lettered in both cross country and track, graduating with the class of 2007. It was during his years of education on the Peninsula that Luke formed many enduring friendships with classmates, bonds which he took pride in and nurtured.

Luke was ever the inquisitive and adventuresome child. Early on he became interested in reptiles and by age 6 acquired his first snake as a pet. Luke developed a high level of knowledge about herpetology and over the years he had many “snake friends” including his ball python “Congo” which survives to this day. Luke never met a snake he didn’t like!

As a child, too, Luke began his lifelong love of fishing. He and his buddies fished all the local ponds, lakes and rivers, including the annual Black Lake Fishing Derby. By age 14 he was a deck hand on charter boats out of the Port of Ilwaco, a job he continued during summer months throughout high school. When he turned 18, Luke was fishing commercially with the annual gillnet season in Alaska’s Bristol Bay. 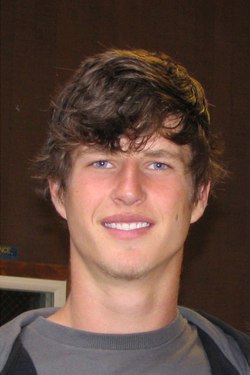 Luke’s love of fishing led him to enroll in the fresh water fisheries program at Humboldt State University and he was currently in his fourth year of the program. While at Humboldt he took up lacrosse and for three years played as a “middie,” enjoying the physical contact and challenge. Luke began snow skiing at age 12 at Mt. Batchelor and soon thereafter became a snow board enthusiast, challenging the slopes throughout the Northwest whenever time permitted. Luke also enjoyed mountain biking — the muddier the better.

Among Luke’s other interests were following the family trait of being an Oregon Ducks sports fan and his pride in his Norwegian heritage. Luke was very much his own man. His loyalty to family and friends, his sensitivity, and kindness touched all that knew him. During his life, Luke enjoyed many memorable adventuresome days at Bear River which he considered a place of special spirituality and tranquility. Luke packed a whole lot of living into a relatively short time and the shadow he cast will not soon be forgotten. Luke lost his physical life doing what he enjoyed best as a result of a fishing incident on March 10, 2012 in the Pacific Ocean.

He is survived by his parents David and Chris Jensen of Ilwaco; sister Meredith Jensen of Los Angeles; aunt and uncle Gale and Dennis Spencer of Troutdale, Ore.; and many cousins in this country, Australia and Britain.

Those wishing are encouraged to support the Luke Jensen Fisheries Scholarship Fund at KeyBank, Long Beach branch. His guestbook is available at www.penttilaschapel.com